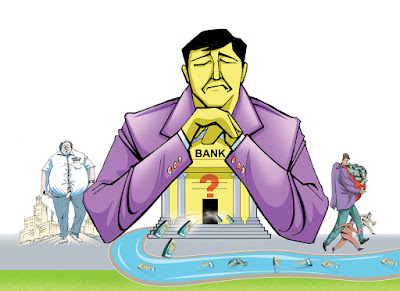 NPA (non-performing asset) has always been a dreadful word in the banking industry but these days this three-lettered acronym is giving sleepless nights to India’s top bankers. The banks, especially public sector ‘sarkari’ ones, have been at receiving end both from the Reserve Bank of India (RBI) and economists for mismanaging their bad debt and even as debates and discussions focus on the lost wealth another crisis is just looming on the horizon. And this is the  possibility of a slow and painful demise of entrepreneurial spirit.
Dreadful as it may sound but the prospect is real and requires urgent steps. Loan disbursal and business-growth are closely related as all enterprises require money. But when debt-repayments do not come back, banks become wary of further lending thereby stifling a source of capital requirement for enterprises.
The good part is that banks are aware of the situation’s gravity and are taking measures to control their NPA—loans where borrowers do not pay either the interest or principal amount, also referred to as the bad-debt. But, unfortunately the bank’s measures of ‘dressing up’ a loan and showing them as restructured is like postponing a problem for a later date.
This loan-restructuring that is supposed to be an exception had been rampant over the last several years. “You can put lipstick on a pig but it doesn’t become a princess, was RBI Governor Raghuram Rajan’s response in 2013 to this dressing up of bad-debt by the banks. The purport of Rajan’s words were clear. The bull must be held by its horns and this NPA needed to be tackled with deft measures. Sadly, the then UPA-II government chose to sit on the problem rather than offer viable solutions.

Well, first things first. This NPA issue did not balloon overnight. Bad-debt had been largely steady but there was a spike in year 2012 when it suddenly jumped to Rs 1.14 lakh crore from Rs 74.6 thousand crore a year ago (see bar chart). This should have set alarm bells ringing and immediate measures could have been implemented by the then government. They chose to close their eyes. As on December 2015 the total NPA for public sector banks is Rs 3.9 lakh crore. The problem has since been worsening.
In the years from 2011 till 2013 there was talk of India growth story, optimism was in the air and PSU banks were more than generous in offering loans to the industry. “During those days the PSU banks wanted to show their commitment towards economic growth through high loan disbursals on their account books and so loans were sanctioned generously,” said DK Aggarwal, Chairman and Managing Director SMC Investments and Advisors.On top of this there was political pressure on banks to offer loans to certain big industrial houses. "The government of the day considered public-sector banks as their personal fiefdom and through us they obliged many industrialists. Norms were flouted and loans were advanced in several tranches. Now when things are getting out of hand the banks are being blamed for not doing their due diligence,” said a senior banker, requesting anonymity.
This banker had a point. Take for instance the case of Vijay Mallya. The liquor baron used his connections to start Kingfisher Airlines in 2005 with loans and advances from public sector banks. The airline that folded its operations in 2012 now owes a mammoth Rs 9,000 crore (including interest) to these banks (see box).
All these years while his airline was bleeding Mallya was unabashedly partying with scantily clad models, buying yacht, private jets and properties across the globe. In fact, alarm bells should have rung when first symptoms of loan default by Mallya became evident. But then he had the right “connections” during both UPA-I and UPA-II regimes and despite reservations by some bankers several tranches of subsequent loans were passed through. 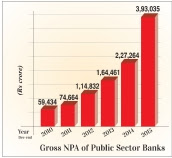 Of course Mallya is not the only rotten fish in pond and there are several other big defaulters. The pertinent question is why and how could the then government let it happen. Intervention at the right time could have saved the thousands of crores of bad-debt of these PSU banks.
“The warning signs started coming in when demand from China slowed down. The excess capacity was being built up at a time when demand was less. The then government could have issued convertible zero-coupon bonds to tide over the bad times and these bonds could have been converted into equity at a later date. All this requires rational and forward thinking which unfortunately was not present at that time,” explained Dr Rajeev Lochan Bishnoi a Director at the Bank of India and a Chartered Accountant. A convertible zero-coupon bond is a debt instrument that is bought at high discounts and offers profit upon its maturity
Amarjit Chopra who has served as a director in another public sector bank said autonomy in decision making at the PSU banks has always been an issue. “The private banks are able to adjust their loan outstanding against land transactions when there is a default but several ifs and buts are raised when PSU banks get strict with big ticket defaulters,” said Chopra.

Entrepreneurship in peril
But then that is past. The dangers of ballooning NPA might affect current business environment and kill business plans of budding and small scale entrepreneurs. Dr Bishnoi explained that entrepreneurship could be the first casualty due this NPA mess. “Today the banks are extremely wary of doling out loans to business houses. In this scenario a budding entrepreneur is finding it extremely difficult to raise fresh capital, which ultimately delays the venture or in worst cases will even lead to folding up of the enterprise.”
On the face of it this might appear a minor collateral damage but then small and budding entrepreneurs have remained the backbone of India’s business. According to a Credit Suisse study the non-corporate sector (read small entrepreneurial ventures) generates around 90% of the total 474 million jobs in India and contribute to half of country’s GDP. The 2013-14 Economic Census reported that close to 57.7 million family-owned non-farming and non-construction businesses yielded 128 million jobs.
Veteran journalist S Gurumurthy in an article has said:  “The banks fund corporate which add very little jobs, but starve the job-rich non-corporate sector of funds.”
It may be argued that within the global ecosystem of start-ups India ranks third, with over 4,200 start-up firms that are growing without government support through borrowings from venture capitalists and angel investors. Well, any enterprise that includes start-ups, after attaining a critical mass, is in need of institutional funding. Also, venture capitalists and angel investors are primarily driven by market conditions and personal choices and most of them are from the technology sector. So while a start-up in the IT sector might find it easy to attract funds a budding enterprise in textiles may not find it so easy.
Similarly, a whole lot of small and medium enterprises (SME) are dependent on banks for their expansion plans. In order to cater to the fund requirements of this SME sector Prime Minister Narendra Modi had introduced the Mudra Finance scheme that offers loans up to Rs 10 lakh for a small enterprise to help them start the business. Yet, when these SMEs become big enough they will require much larger funds for their expansion. And it is here that they will approach the banks (read public sector banks).
If the budding entrepreneurs are denied bank loans then it will be an unfortunate situation for the country. The business environment will suffer and those desperate for funds might land up in the clutches of private money lenders who lend at usurious rates of interest.
Several bankers feel that the ‘90-day overdue’ norm for classification of a loan as an NPA hits at the back of entrepreneurial spirit. The norm was among the several suggestions put forward by the government appointed Narsimhan Committee, which were accepted by the government in 2004-05. This norm was brought to put India on an equal footing with international best practices in finance.
The intentions may have been genuine but then this was never followed by any subsequent improvements in governance practices, which is a must.
For instance, take the case of road infrastructure project where loans have been disbursed. The company laying out roads might be stuck only because a section of the land through which the road had to pass was not acquired by the local government agencies and handed over to the firm. Now, since the firm is unable to complete the entire length of road the payments get delayed that affects the loan installments. Similarly, in a thermal power plant if coal-linkages are not made available on time then the power plant will face a fund crunch.
Bankers admit that this ‘90-day overdue’ system leads to round-tripping of capital and the moment an entrepreneur gets the loan sanctioned his/her mind starts thinking of how to manage the first installment.
The problem gets more acute for budding entrepreneurs who have a fledgling business and robust payment systems are not in place. No entrepreneur would want to turn his account into an NPA as the moment an account is branded as an NPA a kind of mistrust develops and it takes one year of continuous payments to make the account normal. A small entrepreneur who cannot boast of right connections like Vijay Mallya cannot think of further loan disbursal after the initial loan account has been turned NPA. The NPA issue if not taken care of might get out of hand. The focus should be to create a honest entrepreneurs.