The Dream-Robbing of Young Kashmiris 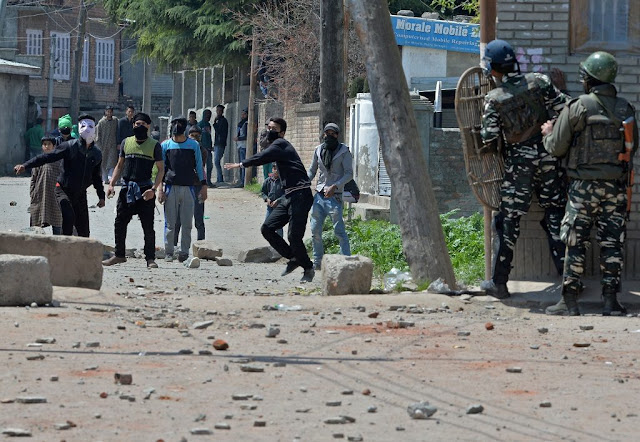 Vivek Sinha
twitter: @viveksinha28
Yet again the picturesque Kashmir Valley is in news for wrong reasons. This time the big talk is about violence that occurred during the by-elections in the Srinagar Parliamentary constituency, which led to the death of eight boys.
Over next few weeks there will be a barrage of news-analysis wherein reams of newsprint will be devoted to the “targeted killing” of “innocent” Kashmiris, and hours of newsroom debates will focus on how Indian state is losing the plot in Jammu Kashmir. Discussion and debates will underline the alienation of Kashmiri youth, plebiscite, UN resolutions, human-rights violation, AFSPA (Armed Forces Special Powers Act) and several others.
During the last months, flash mobs have indulged into targeted stone-pelting at security forces, leading to deaths. Immediately after such incidents there’s always a media frenzy that talks about Kashmir slipping into chaos.
In fact, this follows a pre-mediated script. There’s no deviation from the preconceived trajectory.
No, I am not undermining or belittling the deaths of Kashmiri youth killed in violence during the recent Srinagar by-elections. Of course, these deaths are unfortunate and should not have happened. However, my point is about the selective and prejudiced reporting of the events leading up to such incidents. It’s this biased reporting about Kashmir Valley that has created a vicious cycle of deaths and has helped to cement a farcical narrative about Jammu Kashmir.
Let’s take a hard look at the facts. Kashmir Valley is just 7 % of the geographical area of entire Jammu Kashmir state, which also includes Jammu, Laddakh, Pakistan-occupied Jammu Kashmir (PoJK) and China-occupied Jammu Kashmir (CoJK). Of this 7 % geographical region, incidents of stone-pelting occur in only five districts of the Kashmir Valley—Srinagar, Baramulla, Anantnag, Shopian, and Pulwama.
So why do incidents of stone-pelting and violence occur at regular intervals in these five districts of Kashmir Valley?
It needs to be borne in mind that the pro-Pakistan rabble-rousers dubbed as “Kashmiri Separatists” are fighting a battle for their survival. These Separatist leaders live in Srinagar and yet wish that Jammu Kashmir should secede from India and join Pakistan. The entire coterie of Kashmiri Separatists that includes the likes of Syed Ali Shah Geelani, Mirwaiz Umar Farooq, Asiya Andrabi and Yasin Malik, among others, have their support base in only these five districts of Kashmir Valley.
Interestingly, even in these five districts their hard-core supporters are confined to a few colonies. A large proportion of people in these five cities are either peace loving or support these Separatists out of fear of being ostracised. These fence-sitters are average Kashmiri middle class people, who aspire to lead a happy and content life. Their children want to be doctors, engineers, lawyers, pilots, civil servants, singers, actors or have similar other career ambitions.  Several of these youngsters have even joined the Indian Armed forces. They want to move with the economic development and prosperity of India. And this is what frustrates these pro-Pakistani Separatists.
If an average Kashmiri chooses tourism over terrorism then the entire gambit of Separatists comes to a zero. The Separatists are well aware of this and know that their back is on the wall.
And when the devil (read Separatists) is pushed to the wall (s)he unleashes a devious design. So, they have developed a web of paid agents across Kashmir Valley who work under diverse pseudonyms but for a common master. A human rights activist and an armed Islamic terrorist work in tandem in the same locality and are helped by several other proxies. Their modus operandi, over the last several months, have been to target school children in the age bracket of five to fifteen years.

Roping in children has its own set of benefits. It’s much easier to indoctrinate a school child at an impressionable age plus if he gets hurt (or dies) during stone-pelting violence then his picture is used for propaganda and helps play the victim card.
The Left-leaning media is always eager to lap up such stories. That’s precisely the case in Srinagar by-election violence. None of the journalists who report from and about Kashmir ask a simple question: Why do kids come out during stone pelting? This obvious question was finally asked by the Indian Supreme Court a couple of days ago. “But what are children aged seven, nine and fourteen years doing in a mob? Why are they placed in front of the mob to confront security forces?” asked a Supreme Court Bench that included Chief Justice of India and two other Judges. The question was posed during an ongoing hearing of a Public Interest Litigation (PIL) filed by J&K High Court Bar Association to ban pellet guns used by security forces to quell restive crowds.
A closer look at the stone pelting videos and pictures clearly shows that only a handful of masked youngsters are keen on throwing stones while the rest remain as passive bystanders. The ones who are keen to throw stones and Molotov cocktails (petrol bombs) are the active cadres of these pro-Pakistan Separatists while the much larger crowd of bystanders are the kids who have been forced to come out. A further dichotomy of these bystanders reveals that a large group among these kids comprises of those who have been brought out with the lure of money, and most of them are paid between three hundred to five hundred rupees (USD 4 to USD 7.5)
The remaining and largest segment comprises of kids who have been literally dragged out of their homes. These children join ranks with the notorious Separatist elements only because if they do not, their family will be branded as informers of the Indian Army. Once that happens, the family comes on the radars of Islamic terrorists who work underground. The women from these marked families are mere lumps of meat for Islamic terrorists, who rape and molest them at free will. Every family wants its women to be safe and if the family’s young boys need to pay a price by being a face in the stone-pelting crowd, then so be it. The average Kashmiri has no option but to be a mute spectator during the stone pelting episodes and to take part in the funeral processions of terrorists killed by Indian security forces.
Over the years a perception has been assiduously built that local Kashmiris, especially the youth of Jammu Kashmir, are alienated with India and that they support and endorse Islamic terrorist attacks. This ‘perception management’ works in such a way that opinion, especially the Separatist’s viewpoint, is passed upon as news from the Valley. It is hardly reported that these Pakistan-sympathiser Kashmiri-Separatists and Islamic-terrorists are a mere handful and they do not enjoy the support of masses.
Of late, stories of high handedness of Islamic terrorists and Separatists have begun to trickle down, further eroding their support base. In order to stay relevant they have been desperate to play any kind of mischief.
Recent violence during Srinagar by-elections is a case in point. Whatever be the outcome of this election, it will have no bearing on the state or the national politics. Yet Sheikh Abdullah’s son Farooq Abdullah joined ranks with pro-Pak Separatists to save his National Conference from slipping into political oblivion. His party has lost support over the years due to anti-people polices and he knows that if he loses the by-elections, then its curtains for him and his party. A strategy was thus chalked out to disrupt election voting such that all those who are opposed to Farooq Abdullah are not able to come out to vote and only his supporters would vote, thus paving victory for him. The mere 7 % polling signals the success of these forces who kept common Kashmiris away from the polling booth. During re-polling this voting percentage dropped to a further 2%, such is the fearful atmosphere created in the Valley.
This indeed is a devious strategy. Farooq Abdullah will thump his chest at the electoral victory and yet claim to be a victim saying innocent Kashmiris lost their lives for his victory. The Separatists, on their part, will dismiss the elections as a sham, saying that the people of Kashmir had rejected India’s electoral process.
The fact remains that security forces faced grievous injuries. More than a hundred security personnel have been seriously injured due to stones targeted at them and the deadly Molotov cocktails (petrol bombs) that were hurled upon them.  Yet, the most worrisome aspect in this saga is that the psychological warfare waged by Islamic terrorists in the laboratory of Kashmir may now be tested elsewhere in the world as well.
at April 29, 2017