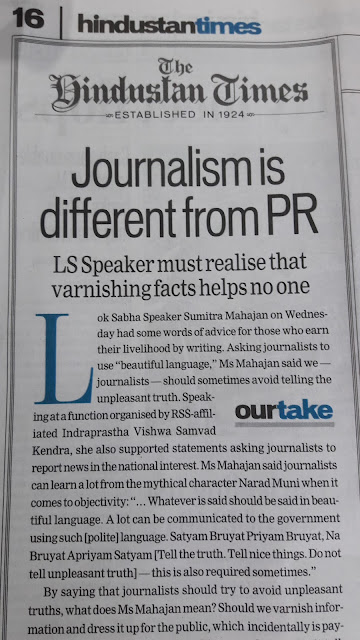 Hindustan Times wrote an editorial under the headline “Journalism is different from PR” on June 23, 2017, taking a high moral ground about objectivity and journalistic freedom about an event that took place in the Indian Capital.

But I feel the editorial was a classic case of distortion of facts.

This editorial took a dig at Lok Sabha Speaker, Ms. Sumitra Mahajan’s speech at the Narad Jayanti awards organised by RSS-affiliate Indraprastha Vishwa Samvad Kendra, New Delhi to felicitate journalists. The editorial scathingly said “varnishing facts helps no one”, in a reference to the Speaker's request to journalists to rely on in-depth reporting.

Ms Mahajan's speech is on the You Tube, editors of Hindustan Times must have a look at it, they should not be misled about comments made by the Speaker, and they should not twist copy to suit their needs.

The issue of reporting in India's maddening newsrooms, whether it is good, bad and ugly, and whether its truthful or not, is now a subject of major debate among journalists themselves. In recent cases, top news channels have even booked hoarding space to criticize rivals who have been extremely vocal.

So, in this very context, one needs to evaluate what Ms Mahajan said at the event. Ms Mahajan categorically said that a journalist needs to go beyond superficial byte-collections and touch the crux of an issue. She took the example of ongoing conflict in Kashmir Valley and the stone pelters to make her point. In very clear words she said that merely running around with a mic and collecting bytes will not help one understand the real reasons of stone pelting in Kashmir Valley.

She explained that journalists need to connect with the youth’s heart in Kashmir Valley that can possibly be done through beautiful language to strike a chord with Kashmir’s youth. She referred to balance in reporting.

It was this “beautiful language” that HT lapped up in its editorial and attributed it to Ms Mahajan’s sermonizing journalists to desist from reporting and writing about unpleasant truth.

It would be worthwhile to read what HT wrote.

“By saying that journalists should try to avoid unpleasant truths, what does Ms. Mahajan mean? Should we varnish information and dress it up for the public, which incidentally is paying to get authentic news? Does this mean that we don’t talk about the shortcomings of government programmes and like good stenographers take down whatever figures are given to us? And can beautiful language hide difficult truths?.....” says the HT editorial that went ahead and extrapolated such vitriol to the “mythical character” Narad Muni. The editorial also included a famous one-liner from George Orwell who had once said: “Journalism is printing what someone else does not want printed: everything else is public relations”.

And this is where most of the journalists, newspapers and news channels falter in India. Facts are suppressed and quotes taken out of context. Journalists have often been hauled over the coals for seeking favours, some have lost their jobs. The energy editor of Hindustan Times was fired for seeking favours from a corporate house, in her parting letter she opened a virtual Pandora's Box about how she routinely raised cash from hydrocarbon companies for the daily's annual, signature event. Worse, top editors have been caught on tape blackmailing corporate captains for cash and then landed up in jail, all leading to a big question mark on the credibility of journalists and media houses.

Never has the objectivity of journalists and news organisations been questioned as it is in present times. Ms Mahajan, gave another example of how three different newspapers quoted three different figures about funds allocated for roads in UP, such that one newspaper said it was Rs 10,000 crore, another mentioned Rs 50,000 crore whereas the third quoted Rs 1,00,000 crore. Surely, different figures quoted by different newspapers cannot be mere typos it can either be lazy reporting or a deliberate design to distort facts to put BJP-led UP government in the dock over misappropriation of funds. And this is what Ms Mahajan referred to during her speech.

Ms Mahajan never attacked journalists, nor their work. She merely highlighted an issue that has repeatedly been talked about by many independent editors themselves: The dangers of Biased news, Paid News.

I had expected the editorial writer to follow and understand the importance of the speech of Lok Sabha speaker, not turn it into a subject of ridicule.

In the age of mindless breaking news, where journalists call their visiting the site of the news Ground Zero reporting, words of caution are good. For the journalists, and all those in the profession.

I hope at least you, the editor of the daily, will agree.