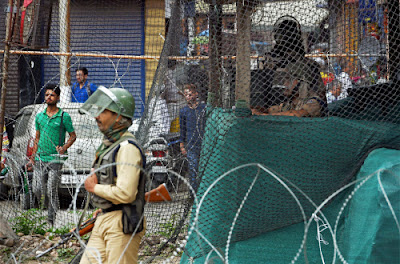 Vivek Sinha
The masks have fallen finally. And decisively so. That the “Kashmir struggle” has nothing to do with Kashmir and is a subset of global Islamic terrorism was always talked about and discussed, albeit in hushed tones, for lack of evidence. This façade has now fallen thanks to a flurry of audio messages by Zakir Musa where he openly advocates for Ghazva-e-Hind and exhorts Indian Muslims to rise up in revolt against the Indian state.
Musa was recently ousted by the Hizbul Mujahideen as chief of its Indian chapter after he clearly stated that terrorism in Kashmir was actually a part of the ongoing global war to establish Islamic Caliphate and has nothing to do with Kashmir’s Azadi. Musa even threatened to behead Hurriyat leaders if they continue to demand Azadi for Kashmir and seek a political solution to Kashmir issue.
Hizbul was quick to distance itself from Musa’s comments and forced Musa to quit as its India chief. Musa, on his part, remained defiant. He stood by his comments and very soon announced to set up a new Islamic outfit reiterating that “Mujahids” like him are fighting only for greater Islamic Caliphate and Kashmir struggle is a cog in this grandiose plan. The concept of Islamic Caliphate dates back to sixth century wherein the newly formed Islamic kingdom in Middle East (West Asia) was ruled by a Caliph according to Sharia laws who enjoyed absolute power. This Caliphate persisted in various forms across the Middle East (West Asia) and frittered away by the 19th Century. Radical Muslims have always dreamt of re-establishing the Caliphate and bringing new lands under Caliphate rule and consider this as Jihad. The set of laws under Caliphate include severe restrictions on a woman’s freedom and dissent to the Caliph is almost always punishable by death.
Terrorist organisations such as al-Qaeda, IS (Islamic State), Lashkar-e-Taiba and Hizbul Mujahideen, among several others recruit youth with an impressionable mind into their ranks for the Islamic holy war to fight for the Caliphate. However, politically they put up the mask of fighting for oppression and injustice and hence try to turn the international opinion in their favour.
Ditto in Kashmir.
Over the years, Hurriyat Conference have used mosques and madarsas for recruiting young Kashmiri boys into joining their fight for Islam. They were subsequently indoctrinated into fighting the infidel Indian State. Thereafter these boys are segregated according to their commitment and inclination to be a terrorist who subsequently join ranks with LeT or Hizbul Mujahideen. The less virulent are asked to lead the mobs of stone pelters. In public the Hurriyat leaders talked about Kashmir’s Azadi thereby drumming up international support in favour of the right of Kashmiris to have self-determination. This double speak continued for several years till Zakir Musa took over as Hizbul’s India chief.
Musa exposed the double speak of Hurriyat leaders. He minced no words when, in his first audio message released in May this year, he questioned the rationale of using mosques and Islamic gatherings by Hurriyat Conference to openly advocate Islamic Sharia and an ambition to establish Islamic Caliphate across Kashmir. “…we want to ask these political hypocrites if Kashmir is a political issue then what’s the meaning of these slogans? Azadi kaa matlab kya? La Illaha Ilallah, (What is the meaning of Azadi? There is no God except Allah), Pakistan say rishta kya? La Illaha Ilallah (What is our relation with Pakistan? There is no God except Allah).”
He explained that Kashmiri youth need not be a part of any political movement and should only fight for the cause of global Islamic resistance. Musa followed this by a third audio message wherein he categorically asked his comrades not to fall in the trap of nationalism and remain on the path to establish Islamic Caliphate. “Khilafat (Caliphate) Unites but Nation Divides” read the poster in his audio message.
In his latest audio message he has further clarified about his intentions. He slammed Indian Muslims for not joining Islamic Jihad for the Ghazwa-e-Hind (battle for the conquest of India) describing them as “shameless” for what he called as inaction on their part. In the clip he also tried to draw a parallel with the holy war of ‘Jung-e-Badr’ (Battle of Badr) that was fought by Prophet Mohammad in 624 AD with the Quraish tribe to establish Islam.
Well, the context and motives of ‘Jung-e-Badr’ was entirely different and drawing parallels with today’s plans to establish Islamic Caliphate smacks of gross ignorance. Yet, the invocation helps win a few ignorant Muslims who impressed by the parallels might be drawn towards these terrorist organisations.
Once inside the ranks they get to know the reality. I recently met an ex-terrorist in Kashmir and he categorically said there was nothing Islamic about Kashmir’s struggle. The boys who join terror groups such as LeT or Hizbul Mujahideen are first spoilt with drugs and women before they are sent out to commit terror attacks. Musa himself confirmed this and said the mujahideens need to stay away from “intoxicating medicines”, a euphemism for drugs.
Musa’s audio messages may have several other layers, yet he has cleared the point that Kashmir’s terrorism is indeed a subset of the terror gambit of al-Qaeda and IS (Islamic State).
(this column first appeared in TOI Blogs)
https://blogs.timesofindia.indiatimes.com/between-the-lines/yes-kashmir-struggle-is-a-subset-of-global-islamic-terror-game/
at February 01, 2018