I was brutally tortured in custody: ISRO Scientist Nambi Narayanan 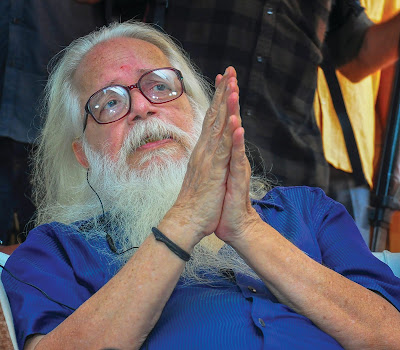 Q: After 24 years, your name has finally been cleared by the Supreme Court of all espionage charges. Who do you think was the real culprit in this entire saga?
Ans: I wouldn’t say there is one culprit, rather there are many people in the story. According to me it is a fabricated case and the Supreme Court also says it is a malicious prosecution. And as you know from the very beginning Kerala police were investigating this and then the Intelligence Bureau (IB) also investigated. So, you can say it is the IB that is responsible, the Kerala Police is responsible, the government is responsible… I wouldn’t say it is one person who was responsible, it is a group of people who were responsible.

Q: Why were you targeted… was this some kind of an international conspiracy to derail India’s cryogenic programme?
Ans: Well, there is nothing on record about such issues but circumstantially when you look at it, this does look as if there are a group of people answerable, some probably from outside the country. We need to investigate and find out whether the circumstances indicate that there was a conspiracy. For instance, there was a contract between India and Russia on the cryogenic project but Russia backed out from the contract without any valid reasons and then they said that it was a forced measure which was beyond their control. Later on we found out that this was because of the Americans, and then America issued sanctions against both Russia and India on this matter. So the whole issue is that it’s not a game of hide and seek. Americans made it very clear that ‘we are not happy about India getting this technology from Russia’. The next question that comes to mind is, why should America be unhappy? And the answer is probably they didn’t like the competition. You can look at it that way, but the point is that they issued sanctions against us, saying that it comes under the missiles control regime. Though this never comes under the missiles control regime, there is no institute in the world using cryogenic technology. So all these circumstances make it look very malicious. Yet the Americans didn’t come here and dig this place, so there must be people who are willing to work for others. Now the mission is to find out who all are these people. There are definitely some persons who has worked for them.

Q: In your book “Ready to Fire” you have said that even if somebody has the designs s/he cannot build a rocket, it’s not something like making a cake. Can you please elaborate on this?
Ans: Let me explain to you in a layman’s language. Let’s take the example an aircraft like the Airbus. Now this Airbus is serviced and maintained by our own people. After these aircrafts complete a particular number of flying hours then they completely refurbish it, which means that they shift the entire aircraft to our country and then starts the process of rebuilding this aircraft from scratch. So there is a specific procedure for this, there are spare parts and methods to assemble, there is a sequence of assembly, etc etc. Now all these are done by our own people, there is no American involvement here. Now my question is, if we can completely assemble an entire aircraft then why can’t we have our own aircraft like an Airbus? Can’t we make this aircraft? We are doing everything, all the parts, drawings, methods, sequences, assembly procedures everything we have but still we are buying Airbus only from the western world. So, what I am explaining to you is the meaning of technology and its transfer. Yes we have the knowledge about ‘Know How’ of Airbus aircraft’s technology but technology transfer happens only when we also have the ‘Know Why’. Even if we have the spare parts of the aircraft we only have the ‘Know How’ we don’t have the actual technology which is ‘Know Why’. Similarly, in the case of a cryogenic engine mere possession of drawings means nothing. There is no technology transfer.

Q: Before you were maliciously prosecuted, were you approached with some kinds of inducements or were asked to give up this cryogenic programme…
Ans: The answer is no. But let me tell you in any such international conspiracy they wouldn’t say such a thing openly, they will try to do these things without creating any suspicion. They will not expose themselves. Also, probably because they already knew my character, that I am not available for any inducements. All the companies that came to me for contracts were trying to be nice to me… they would say that ‘you are an awesome fellow’…‘you studied in USA’ etc…. ‘so why don’t you give us a contract’. Other fellows, the French fellows also came in a similar manner, but I turned them down. I said okay send me your quotation let me have a look at it. Then I didn’t bother both of them about this. So they knew that I was not available and they could not lure me so they did not approach me.

Q: Was it your passion, your abilities and your capabilities which went against you… such that they tried to discredit you through this dubious scheming and all…
Ans: I was holding so many responsibilities at that time. I was the project director for the second stage of Vikas engine PSLV, I was the project director for Cryogenics, I was Deputy Director for Liquid Spender and so on and so forth. I can keep on going about my responsibilities during those times. So I was crucial in the launch vehicle development. Now, if I can be removed for sometime then there is a likelihood that the entire programme will get delayed, if is not completely abolished. So what they have done is that they have delayed it by removing me from these projects and the bad name that I received meant that no one was going to get in touch with me ever.

Q: What was the role of CBI officials in this matter?
Ans: If not for the CBI, the truth would not have come out. The CBI investigated it thoroughly and finally they only found out the truth and they wrote that it is a false case. But I would have appreciated if the CBI would have also found out as to who fabricated this case. If it was a false case then it was a fabricated case as well. If they would have found out what was the motive, things would not have taken this much time, these many years, but they didn’t do that. Yet they found out that this was a false case.

Q: What about your former colleagues at ISRO, especially the former President of India Dr. APJ Abdul Kalam… how was his reaction?
Ans: All of them knew me that I have not done anything wrong, they were supporting me. But their open support came a little late, after one year or one and a half years, but yes they supported me. All these people wrote an open letter explaining to the whole team and also appreciating my contribution to the entire organization. They also mentioned in that open letter that it was unfair to have such a case on me.

Q: And what about former president Dr. Kalam…
Ans: Actually I was a very close colleague of Kalam, and he always used to appreciate me. He told me that don’t waste your time in fighting this case. Kalam reasoned that I could make good use of my time more meaningfully, more productively for the country. So, he offered me a job, a place to use my time far more effectively. He also told me to believe in God and that God will punish them and called me to work with him. I said thank you and went back to court.

Q: You came back from US at the request of Dr. Vikram Sarabhai. Did you ever regret coming back to India and falling into this trap?
Ans: I came because of Sarabhai and unfortunately Sarabhai died under some mysterious circumstances but then after him others encouraged me and helped me. So I never had the opportunity to regret about having come back to India. Even after this case started I kept working my way through and I won the case. You know my case is not a normal case, I was fighting two governments-- Centre and the State, both powerful governments. Some kind of activity were going on and I was helpless. Initially the media was also against me and they can manipulate things. But, slowly I got public support and then visual media brought out the truth and finally the CBI gave a big twist to my case by saying that it was a false case. Even after this people did not believe. Till this time nobody made a clear statement saying that this was a malicious prosecution that my arrest was unwarranted and I was tortured while in custody. Later on, the Supreme Court came to my rescue. They quashed the Kerala government’s order for further investigation. They have very clearly said that it is a malicious prosecution. They went ahead and have formed a committee and the committee is supposed to find out about the officials (who implicated me) and their whereabouts. The only remedy that I got was from the Supreme Court and finally the decision has come which is written and then it could also be told. There is public support, people like you, other people and media are also with me now and that is what is happening.

Q: Sir it’s been so long now, what lies next for you, what is the way ahead? I understand that you have lost so much and you could’ve contributed so much for the country’s space programme. The relief from Supreme Court is too little and too late but still what lies next for you… what are you going to do now? How are you going to take this further?
Ans: Well, my only regret is that if this case had not have happened at least we would have been far ahead of our schedule like earlier. My aim was to make India a super space power. But that dream was shattered. I have reached the stage where the younger generation should take from the point where I got it and then try to teach the culprits as far as this case goes and then put them in the place where they really should be. And as far as I am concerned I am going to prefer to be with my family and I would associate myself with certain assignments and other things which could be useful to the society but non-ISRO related matters.
Further, I have realized that in our country wherever there is power I see them get a kick in their heads by misusing their power. A minister or even a peon sitting on a powerful seat tend to misuse power. Barring a few, everyone wearing a khaki thinks they have become a Superman and they can do anything they want, nobody can question them. In my case the Kerala Police had no jurisdiction, it was like a traffic police solving a murder case. I must say that we should learn to be within the framework of our constitution and our rights.

(Vivek Sinha is a Journalist, Filmmaker and Author of the Novel "Chip in the Madrasa". His Twitter handle is @viveksinha28. He interviewed Nambi Narayanan as the Editor of Power Corridors news magazine. This interview was first published in October 2018 issue)
at October 20, 2018